Winter is a hard time for utilitarian bikers in Quebec. And due to the usage of rock salt for de-icing, it is even a lethal time for bikes. I always use a different bicycle for winters, because each bicycle used in winter is sacrificed. Except for those able to arse themselves enough to perform sufficient maintenance, a bicycle not designed for winter is usually pretty much unusable after a single season.

Therefore, I have been buying one bicycle per winter for more than a decade. Winter biking has lots of downsides, but since I started working in an office, the need to keep my clothing acceptably clean has created a new problem - equipping each new winter bike with efficient mudguards. This simple requirement has turned out to be nearly as problematic as obtaining the bike itself.

It may be a surprise to those who haven't tried winter biking in snowy countries, but fenders are not only useful on winter bikes, but more useful than during summer. Of course, there is no water during the coldest part of winter. But the winter bike is needed from the moment de-icing starts to the moment where streets are cleaned. This comprises an initial period of several weeks where streets are very frequently wet due to melting, as well as another such period at the end. Snow melting is not the only reason why fenders are required for winter. Again, it's rock salt which makes matters worse, by keeping streets wet even under 0 °C, and most importantly, by turning white snow and clear water into dirty brown slush and liquid. It is one thing to come to the office with a dirty and rusty ugly bike. It is another one to also go with a coat and/or backpack covered by dirt.

One would think you could reuse the previous winter bike's mudguards. But since each bike is different, I often have to buy a different model. Or, there is just so much rust that the previous mudguard cannot be removed. Since each installation is different, I have spent hours furiously installing mudguards (sometimes with poor instructions) on sometimes hardly compatible bikes. Therefore, a few years ago, I started asking whichever store sells the bike to sell me compatible mudguards and to install them (I officially gave up in 2012, swearing to myself never to install mudguards by myself again).

Just buying mudguards and getting them installed is sometimes nearly as costly and/or time-consuming as buying a used bike. But the most frustrating part is when the installation is deficient. The front mudguard is usually a lesser problem, although I have had several break. The rear mudguard is often worst because some models have no good support to attach classic mudguards (for example, on bikes with rear shock absorbers).

This year, my winter bike has rear suspension. I was very skeptical when the store recommended a seatpost-mounted mudguard. But since the seller assured me the fender would stay adjusted and efficient, and since there were no other options, I did go with a seatpost-mounted mudguard - specifically a Polisport CROSS COUNTRY mudguard (aka SPLASH QUICK GUARD), supposedly designed for mountain bikes. The product requires no tools and very little time to install… according to the manufacturer anyway. Indeed, the initial installation required no tools and 2 minutes.


It only took a couple kilometers to notice that due to the shock absorber, the mudguard would often collide with the tire. So I had to re-install the mudguard higher. Next, it only took a few rides to notice that as with other seatpost-mounted mudguards, its angle would vary, losing its alignment with the tire and causing crappy efficiency. I then removed the bottle cage to allow more room for my hands, so that I could tighten the attachment as much as possible (because it's not just that the installation requires no tools - you cannot use tools to maximize the grip, unless you're willing to risk breaking the plastic). Again, it was just a matter of a couple of rides to notice that even if the CROSS COUNTRY mudguard stays in the optimal position, it does not stop all water. Frankly, this is not a surprise when you look at its width and how badly it fits with my wheel (to be fair, the efficiency is probably lowered because my shock absorber forced me to keep extra distance between the mudguard and the tire).

So last weekend, I gave up, somewhat broke my commitment to myself and resorted to patching the CROSS COUNTRY with thick cardboard cut from a jumbo cereal box. I taped the piece face down (so that the part stopping the water is the most water-proof) on top of the mudguard. Bending thick cardboard in 2 directions simultaneously is non-trivial. In total, I suppose I spent nearly an hour {re,}installing that mudguard so far. Since that patch is installed, I didn't notice any leakage. The result is however esthetically imperfect: 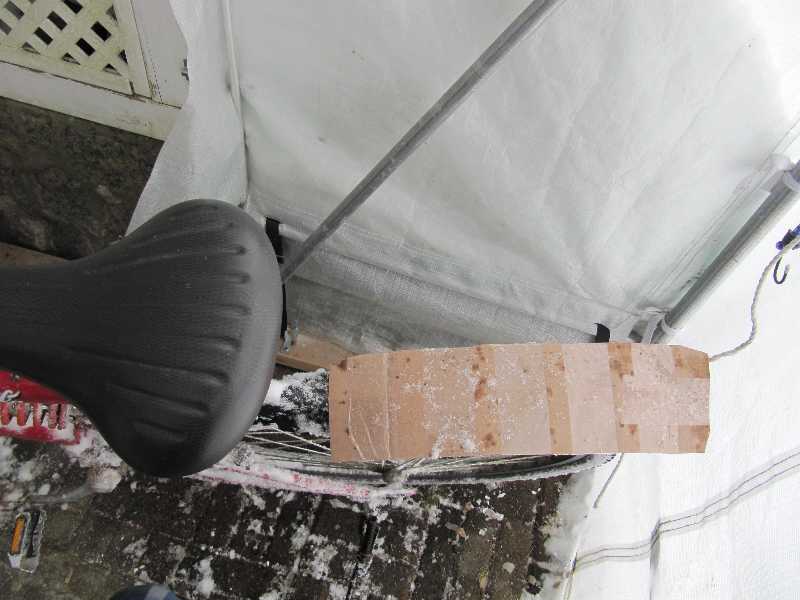 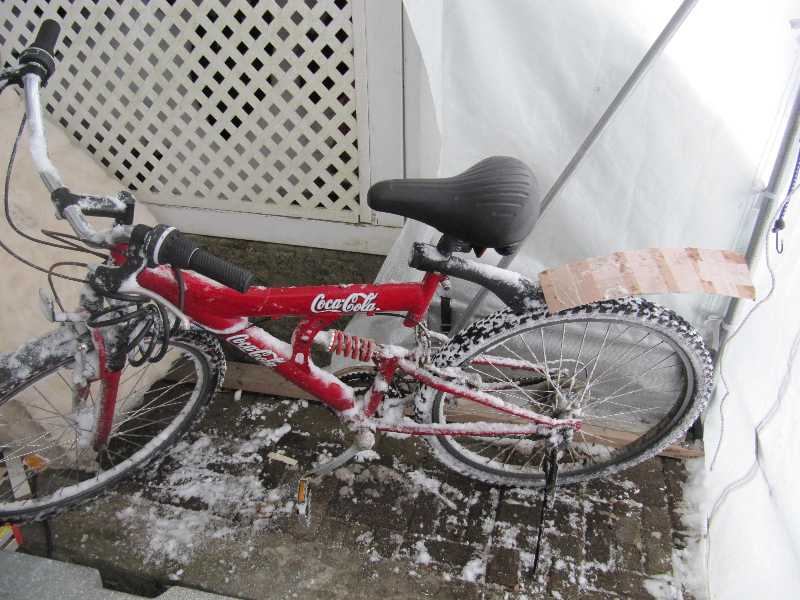 Side view of my patched mudguard


The positioning also remains imperfect - I felt another collision between the mudguard and the tire today. But I was satisfied enough to refrain myself from this rant until an anecdote 2 days ago. My bike was next to another one in a rack designed for 4 bikes. This is uncommon during winter here, so I couldn't help but to look at the other bike. I then couldn't help but to notice the bike's rear mudguard, since that was the exact same model as mine (still in unpatched form). And I obviously couldn't miss the fact that as a true Polisport CROSS COUNTRY mudguard, it deviated from the wheel by about 1°, meaning it was surely letting half of the water go through, towards its poor owner.

I will not claim that seatpost-mounted mudguards should not exist. But Polisport's CROSS COUNTRY mudguard is not wide enough to do a good job on mountain bikes. And it is way too unstable. Do not buy it.

Update: a month after writing this, I passed an adult winter biker who was walking next to his bicycle, on which a not-so-young child was sitting. I was considering asking them why they were traveling that way when I was passed by a teenage winter biker. I realized his bike had a misaligned seatpost-mounted rear mudguard. When I caught up with him, I confirmed it was Polisport's CROSS COUNTRY.