Once upon a time, the Sun shined on hundreds of countries. Each country had 4 seasons, but no 2 countries were the same. Many had turkeys. Some had donkeys. And a few had monkeys. But all had many more chimneys.


Turkeys, donkeys, monkeys and chimneys all exhaled air. But the air from chimneys didn't smell the same. Chimney air was dirty. Yet, new chimneys were many. The seasons were getting funky, and - increasingly - badly windy. Humanity was in a hurry. It was urgent to act before the skies got so stinky that Terra and Gaia would get angry.

The chimneys weren't all equal. One big house had the biggest chimney. It had been named the White House, but a century later, its chimney was pretty dirty−actually, not so pretty.

There was nearly unanimity that a treaty was necessary for chimney equality. Each land embarked an emissary on a multi-year journey. After a stopover in Rio de Janeiro, they would go until Kyoto to agree all could no longer build any chimney without fee.

In the White House lived the chief of his country, who had some difficulty. His neighbors wanted big chimneys too, so he couldn't sign the treaty. Ironically, he was not so happy with his mega-chimney. He preferred cigars, and found proximity to his smokyiley assistant Ms. Lewinsky, with her psychology degree still shiny, extremely tasty.

The lighter sparked controversy. The First Lady would excuse his adultery, but when public scrutiny reached its apogee, he had a moment of folly. Afraid to make the inquiry excessively lengthy, he refrained from a guilty plea at his testimony. Sadly, his perjury would only prolong his calvary for what seemed like an eternity.

The cigar-loving chief wanted to negotiate rules more friendly to any county which was already smelly. But with all the time and energy he had lost due to dishonesty, soon it was time for him to go back to privacy. To choose the next chief, there would be a survey. 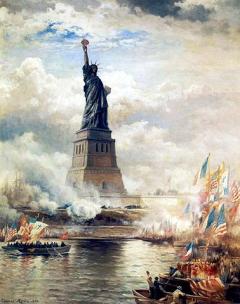 The Chimney of Liberty, welcoming arrivers directly at the entry

Polling in these ancient times was rudimentary. Every grownup drew a cross on a piece of tree for the candidate they hoped would be the most worthy titulary. Their land of legendary opportunity had gone from oversea colony to sovereignty, overthrowing His Majesty. Its territory, which spanned the Mississippi's entirety, had risked its unity to end slavery. More recently, it had decisively triumphed over gravity to carry their highly starry flag to a celestial body, and successfully returned from that revolutionary odyssey with a dusty treasury for mankind to study. To many, their synergy−which they called democracy−was the envy.

But it was aging, as were some people in charge of the survey. Some had lost the ability to see and count their fingers correctly. Worse, the people were given a simple choice, but options they found tricky. The vice chief was one nominee. Originary from Tennessee, he shared the disgraced chief's ideology. Nobody wanted to turn the vice chief into another viced chief with very shaky integrity. As for the other nominee, he was from the chimney industry. The Tennessean ended the rivalry with more crosses, but too barely for the old people in charge of the survey to properly tally.

Despite the vice chief's plurality, it was ultimately his adversary who had a party and declared victory. The lucky sonny was a cowboy like his daddy. He said he was no Yankee. Definitely, he was no monkey; he knew the industry's vulnerability. The chimney was key - if any factory didn't have plenty electricity, his wealthy buddy's customary generosity could yield bankruptcy. Yet outside sunny Death Valley, generating energy fully cleanly with a chimney's intensity wouldn't be immediately easy. Many above sixty wouldn't fancy the necessary decree. And what utility would it be, when his only battery was military?

His greatest worry was the next survey, which would come quickly. His grocery would be pretty costly on his piggy money should recovery of his pre-treaty popularity require to carry penny candy, Kentucky poultry and Old Milwaukee to every family. Surely, plenty already had a heavy belly.

The new chief said becoming chimney-unfriendly would be as risky as letting the GDP do bungee:

George W. Bush wrote:
I will not accept a plan that will harm our economy and hurt American workers.

The land of liberty would see no gloomy chimney fee under his authority. Without apology or further ceremony, he unambiguously ripped up his copy. What problem could there be? Should Ra, Helios, Sol or any deity unleash particularly incendiary fury on the entirety of biodiversity, the penitentiary was already at capacity. He had Discovery and more shuttles to steer clear from planetary misery and flee, free of injury.


Thus a sorryNot to say buggy presidency cost the Kyoto Protocol its relevancy. The price of a faulty survey methodology combined to debauchery would be hefty.
Once upon a time, nobody could foresee the United States of America would ever suffer greater stupidity and travesty.

This artistic work does not claim full accuracy. As part of an essay about activism, it uses polarization for effect.

The Republican party is not Pure Evil. In fact, even George's W. Bush's father, President George H.W. Bush, promised as early as 1992 “an action plan on climate change.”